For months now I’ve flipped wistfully through magazine after magazine, mooning over photos of dark green stalks and oohing and ahhing at recipes as I daydream of Spring.  I’ve repeatedly paused beside the co-op’s local produce cooler, glancing from turnip to, well, turnip and heaving great put-upon sighs before wending my way listlessly among the monotonous aisles of pantry staples. I’ve attempted to cheer myself up by flirting with spinach and chard and other leafy greens as they’ve appeared, but I’ve remained inconsolable. I’ve been waiting for asparagus.

What I hadn’t counted on, despite the praise heaped upon them by every publication from Bon Appétit to National Geographic, was ramps.  Wild ramps, by virtue of their very wildness, are a hallmark of culinary hipster-dom, the food world’s equivalent of skinny jeans and high-top Chucks and loving that band long before you’d ever even heard of it.  But that’s no reason not to try them.  Ramps grow in moist, wooded areas across most of the US and parts of Canada and are easily distinguished from their lily of the valley look-alikes by their ridiculously oniony smell.  I found mine not far from the asparagus — in the produce cooler, safe and sound inside a clear plastic bag bearing a handwritten sticker that identified them as wild ramps.  I suspect this makes me a bit of a poseur, but as long as I steer clear of broken-in chinos I’ll probably be okay.

END_OF_DOCUMENT_TOKEN_TO_BE_REPLACED

I’ve always had a rocky relationship with leftovers.  I grew up in a fairly obsessive family for whom garbage night was a major production that naturally involved cleaning out the fridge.  My father was particularly fond of this weekly ritual; he’d bustle from refrigerator to microwave to table, peering into smelly tupperware containers, shaking nearly empty bottles and saying things like, “It’s garbage night. Who wants to finish this ketchup?”

Needless to say, nobody really wanted to finish that ketchup.  Nor could any of us be convinced that three spears of mushy canned asparagus, a crusty corner of rubbery lasagna, and half a pork chop of questionable age constituted a decent meal.  Yet such were the offerings on a typical leftover night; we ate what there was to eat and then admired the clear, white space we’d created inside our refrigerator.

But despite the satisfaction a newly-organized refrigerator brings, it’s taken many years and several revelations for me to warm up to the idea of eating leftovers on purpose.  Revelation number one:  the microwave is capable of ruining just about anything, so it’s much better to repurpose leftovers than to reheat them.  Once I’d embraced that concept I made all sorts of wonderful discoveries, not the least of which was suppli di riso, which is really just a fancy Italian way to say, “rice balls.”
END_OF_DOCUMENT_TOKEN_TO_BE_REPLACED

Let’s say, hypothetically, that nearly every stand at your local farmers market is teeming with perfectly formed, bright green little zucchini — any and all of which could be yours for a mere $1 a pound.  How much do you buy?

Right.  A lot more than what’s pictured above.  Because it seems silly to hand your friendly neighborhood farmer just one measly dollar and be on your way.  I mean, this is food we’re talking about.

My point is that we’ve been eating a lot of zucchini lately.  But when Chris wandered into the kitchen yesterday and groaned, “You put zucchini in cookies?” (I did.  I don’t recommend it.), I thought it might be time for a frozen pizza. 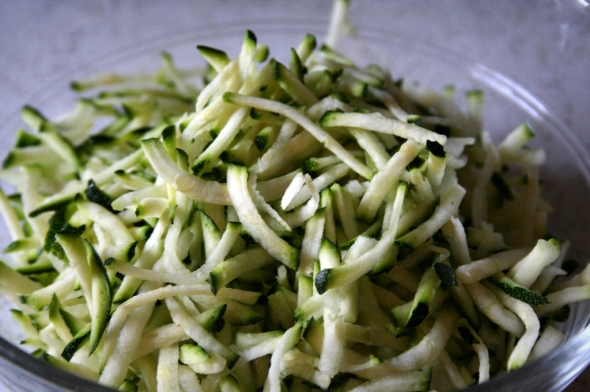 Not for me, of course.  I could eat zucchini every day from now until the blizzards come.  Plus I had a pint of four-day-old cherry tomatoes languishing on the counter and quite a bit of shredded zucchini left over from the aforementioned cookie debacle.
END_OF_DOCUMENT_TOKEN_TO_BE_REPLACED