Winter is magical. I generally have to be reminded of this. Often. Having grown up south of the Mason-Dixon line, I don’t have a natural affinity for things like ice and snow and frostbite, but other people do, namely my Midwestern husband and his Midwestern friends. We had company last weekend— friends from Chicago who came up to ski. And they did ski a little, but mostly I think they came up to open our back door, take deep breaths of frigid northern air and shout, with arms outstretched, “Who wants to go walk barefoot in the snow?” (no takers) 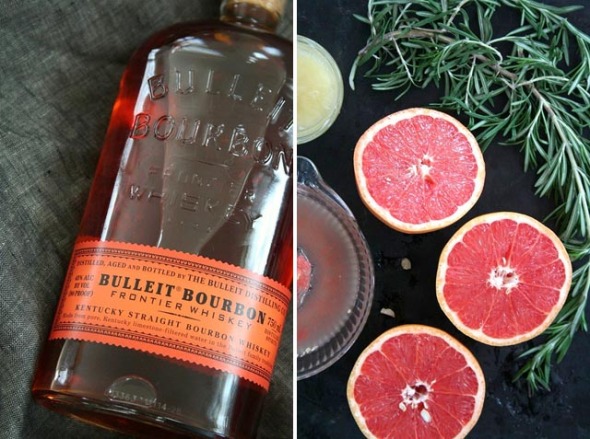 On Sunday afternoon while everyone skied I made après-ski cocktails. I stood by the windows in our cozy kitchen absentmindedly squeezing grapefruit juice as I admired the sparkle and shimmer of soft winter sunlight on freshly fallen snow. When the skiers returned, flushed and exhilarated, I mixed the grapefruit juice with rosemary-infused honey and the warm, comforting notes of bourbon and set a jug out on the counter. And the skiers said, “Oh thank you, but I like my bourbon straight,” and, “Hmmm, I’m not really a big fan of bourbon,” and, “Oooh, that looks great; I think I’ll have a beer.”

Midwesterners. I tell you what.

So I’ve been drinking Brown Derbys all week and reveling in the vivid sparkle of late winter. Grapefruit and bourbon and rosemary would taste perfectly nice any time of year, but the bright, herbaceous sweetness is particularly lovely against the bracing chill of February. This is a late afternoon cocktail, a sipping sort of cocktail, a cocktail to enjoy with friends. And if you decide to go tromping about barefoot in the snow, you’ll want a few of these in you for sure. 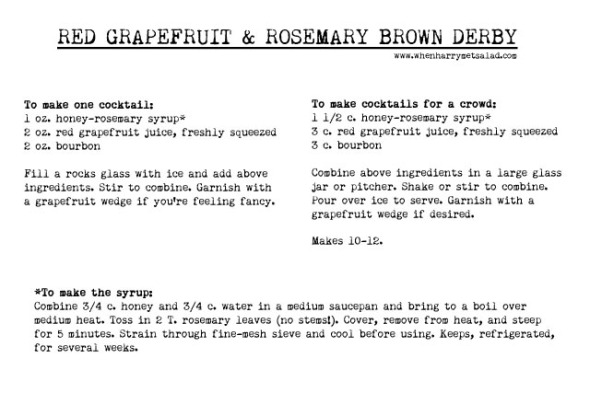