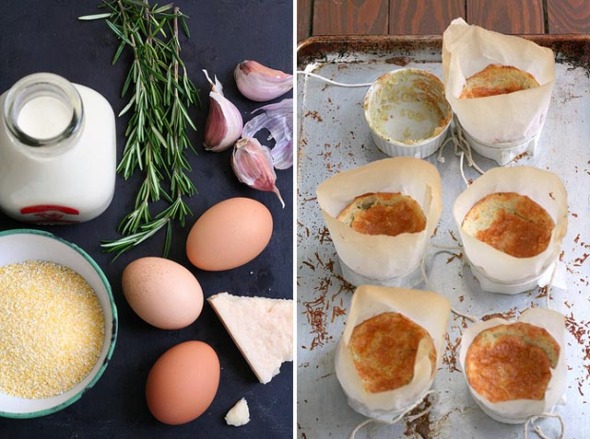 My soufflés fell. They fell, I’m fairly certain, because I insisted on peeking at them repeatedly through the cracked oven door to make sure they were puffing up nicely. And they were, at one point. But when I pulled them all golden brown and fragrant from the hot oven, they’d fallen flatter than a pancake, concave even. “Shit, now what am I gonna do,” I thought, not out of any real concern for dinner but because I needed pretty pictures for my blog.

I like taking pictures of the food I make. It’s a meditative thing for me, being in the kitchen and behind the camera, but sometimes it gets away from me.  I had a whole story mapped out around this grits soufflé, a story about homesickness—- deep, achey, ever-present, adrift-at-sea homesickness. Grits help with that sort of thing, because food—- the kind of food we care about—- is never really about just food. So I thought I’d make grits, and then I thought, “good lord, who wants to look at a picture of grits?” Within a matter of hours I’d managed to transform my antidote to homesickness into a source of anxiety over blog-worthy photographs. And just as I was beginning to fret about how I’d find the time to remake the soufflés and the light to re-photograph them by my self-imposed weekend deadline, I stumbled upon Brian Ferry’s beautiful post about honesty and the creative process. Before I was even halfway through, I’d decided not to revisit the soufflés.

I spend an awful lot of time thinking about photography, and the photographs that most interest me are those that capture things as they are—- un-staged, un-styled, of-the-moment sorts of photos. That’s not exactly the honesty that Brian was talking about, but it’s what I was reminded of as I read his post.

It’s true, I could make the soufflés again, but I’d only be doing it because I needed a photo of them, and then the things I do for pleasure—- cooking, photographing, writing—- would become a chore. Instead, I give you the soufflés as they were, along with the recipe, which I’ve successfully made for occasions both special and ordinary and which I can assure you do puff up light and airy, creamy and pleasantly gritty, with a whisper of piney rosemary and the sweet, mellow nip of roasted garlic. 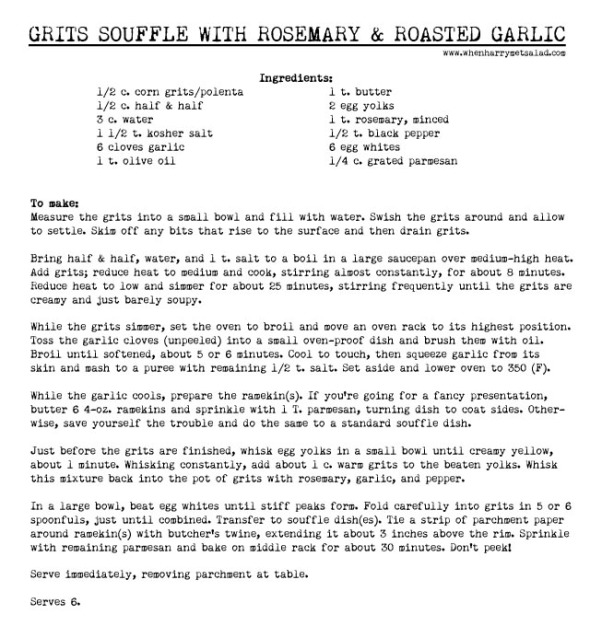 recipe adapted, ever-so-slightly, from The Lee Bros. Southern Cookbook, which I love to pieces

On a typical weeknight Chris and I like to watch Jeopardy and then, once I’ve finished kicking Chris’s ass, Alton Brown’s Good Eats.  Such is the exciting life of nerds.  Truth be told, I only beat him at Jeopardy about half the time and Chris only tolerates Good Eats because AB occasionally talks about bacon.  We mostly watch because I kind of have a thing for Alton Brown, what with his geeky culinary evangelism and his cheesy impersonations of historical figures.  But the other night instead of Good Eats we caught a very old rerun of the first ever episode of Feasting on Asphalt, in which AB meanders through Georgia and the Carolinas sampling collards and pinto beans, fried chicken and pickled pigs’ feet, and cornbread and biscuits.

It was the biscuits that got me.
END_OF_DOCUMENT_TOKEN_TO_BE_REPLACED